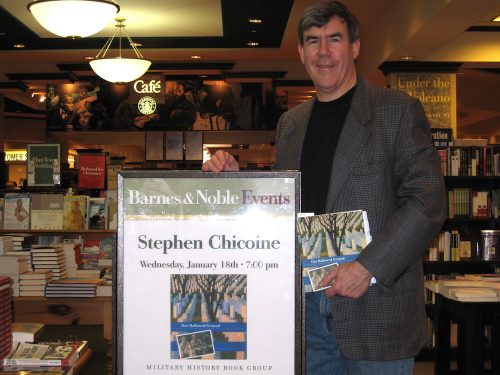 I learned a great deal about public speaking from two Civil War field tours with acclaimed Civil War historian and tour guide Ed Bearrs. I and many others consider Ed to be the greatest living American tour guide. I knew much of the history of which he spoke, but I had never before heard the stories presented in such a way. His theatrical presentations captivated me and convinced me to study not just content, but delivery. When I am in my mid 90s, I hope to be even close to being as effective and entertaining as a public speaker and guide as Ed Bearrs. After all, it is all about the show.

click above to hear my story of two Marines, buried in Lakewood,
who fought at Belleau Wood, 100 years ago

CAPTAIN MALLON AND OTHER DOUGHBOY HEROES
OF FORT SNELLING NATIONAL CEMETERY
to the Clearwater County Historical Society in Bagley, MN on September 26, 2017

SAVING LIVES DURING THE GREAT WAR: AMBULANCE DRIVERS AND NURSES
to Northern Exposure Lifelong Learning at the Bagley American Legion Post on September 27, 2017

JOHN BASIL TURCHIN AND THE CONDUCT OF THE CIVIL WAR
to the Cannon Valley Civil War Roundtable in Faribault, MN on September 21, 2017

Sam Houston in His Own Words performed by Steve Chicoine 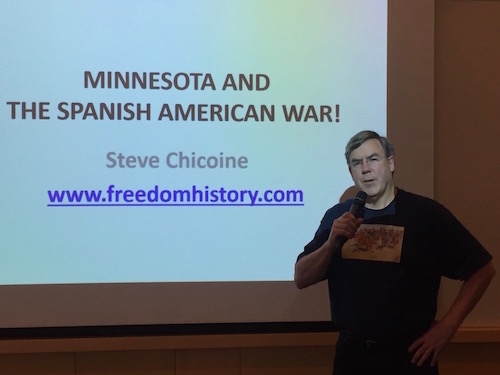 Photo of historian Steve Chicoine with Bob Michelson, B-29 crew member with 20th Air Force/29th Bomb Group/52nd Bomb Squadron based on Guam, shot down over Tokyo in May 1945 and liberated September 1945 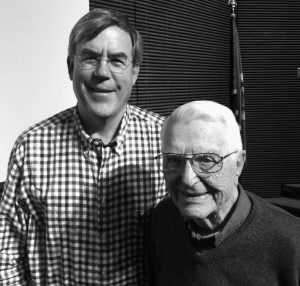